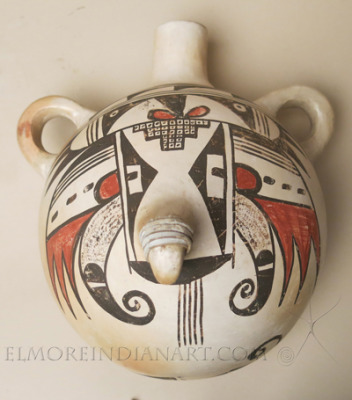 This unique kachina canteen is signed on the bottom with Lena Charlie’s corn hallmark. Lena Charlie was a relative of Nampeyo and is known to have painted her pottery when her eyesight began to fail. Particularly after Lessou died in 1930, and Fannie had married and moved away, Nampeyo relied on Lena to paint her pottery for her. Lena Charlie is regarded as a prolific master potter who created pottery for at least 30 years. She is the grandmother of the artist Neil David, who traveled to Chicago with her in the early 1950s to demonstrate pottery. The canteen is traditionally fired with a pleasing tonality from pure white to rosy orange. The kachina depicted on the face of the canteen appears to be a Sikyatki Revival variation of Ahola with his beak. The canteen measures 9 ½” height at the spout and 9” diameter, and is in excellent condition. The leather-wrapped beak may cover a Native repair. This is a superb and unusual example of Hopi pottery from the 1930s.

Email the Gallery about this item