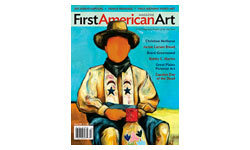 August 2015 Review by Jean Merz-Edwards A keen interest in Hopi pottery led collector and gallery owner Steve Elmore to spend the past quarter of a century researching the life and work of the Hopi-Tewa artist Nampeyo (ca. 1856-1942). In his new, self-published monograph, Elmore sets out to document these findings from his studies and subsequently make his contribution to the field of art history. Focused on a time from 1875 to 1892, the author fills the gap in current literature about the early life and work of artist and potter Nampeyo, which in turn disrupts the existing narrative of the Sikyatki Revival. While the author achieves what he set out to do, challenges remain within the text that undermine the significance of this work based on its confusion about the intended audience. From its start, the monograph's narrow thesis and broad approach position its claim successfully. The first lines of In Search of Nampeyo: The Early Years, 1875-1892 state Elmore's main argument: "My purpose is to reclaim for Nampeyo authorship of a large body of her early ceramic work in the Thomas Keam Collection at the Peabody Museum ad to reveal some of the origins of the Sikyatki Revival." This specific thesis is achieved through a multifaceted approach of visual analysis, biography, and history, and through mainly primary sources such as historical and contemporary photographs, oral history, and fieldwork. Elmore also refers to secondary sources. Overall, the book overwhelms its main argument due to broad and thorough content, making it clear that Elmore has been thinking about this topic for the past 25 years. A credible foundation for the conversation, the text begins with a forward by Nampeyo's granddaughter Rachel Sahmie (Hopi-Tewa). Sahmie, an artist in her own right, carries on the legacy of her family by using the same techniques in pottery as her mother and grandmother. Elmore's relationship with Sahmie connects through the art itself. In addition to owning pieces by Nampeyo, according to the text, he has been "buying pottery from Rachel's mother Priscilla Namigha since the late 1980s as well as from Rachel." It logically follows that Sahmie accompanied Elmore to visit the Keam Collection as part of the fieldwork. Sahmie understands the technical aspects of Nampeyo's work at a level that makes her a leading expert. Subsequently, before Elmore begins the first page of his argument, Sahmie writes an emotionally moving forward, which conveys her belief that a large portion of the ceramics in the Keam Collection are indeed by her grandmother. Consistent with Sahmie's inclusion in In Search of Nampeyo: The Early Years, 1875-1892, the strength of the book is the position from which Elmore engages the world. By writing from a place that focuses on the art, Elmore is deeply allied with the artist who creates the work. In turn, he cares enough about the outside world to share these objects with them. In other words, Elmore's perspective as a self-described trader positions him as mediator between different worlds, which adds great value and credibility to the text. Additionally, the way he seeks and shares information contains less inherent bias. The result is a publication that provides a surprisingly well-written ad organized piece of literature documenting Nampeyo's early professional life, the context for when her career was established, and the significance of these early years. This period predates the excavation of Sikyatki by anthropologist Jesse Fewkes and disrupts the current narrative that Fewkes was a driving force for the revival, thus solidifying the young Nampeyo as the founder of the "modern" Sikyatki Revival. While the text is successful, a few challenged prevent it from being a scholarly masterpiece. From the outset, Elmore makes it clear that he intends his monograph to be an academic work by situating In Search of Nampeyo within the current literature and by providing an extensive discussion of his methodology in chapter one. However, the lack of properly documenting secondary sources challenges the validity of Elmore's work as an academic piece. This move includes not documenting most secondary sources and not using the standard style for this genre of literature in the rare instances when these sources are cited. The decision to self-publish rather than work with a university press further underscores this point. In other words, these choices position In Search of Nampeyo: The Early Years, 1875-1892 in the precarious position of not having a clearly identified audience.
That being said, the content of the publication reaches far beyond its specific claim, and achieves something much larger, mainly due to Elmore's extensive expertise and experience of working with Hopi pottery and Hopi potters. In addition to being a collector and a professed trader, in the past 15 years, Elmore has visited 25 museums to study works that he suspected might be connected to Nampeyo or her family. In these pursuits, Elmore's fascination with Nampeyo's early life and work propelled him forward because, according to the author, "the more I inquired about Nampeyo and her pottery, the more I met mystery." The end result is that Elmore does indeed "find" Nampeyo at the Keam Collection, and in turn he writes a book that documents the artist's early work and life, which ultimately affirms Nampeyo as a woman on par with the other masters solidly situated within the canon of art history. -Jean Merz-Edwards