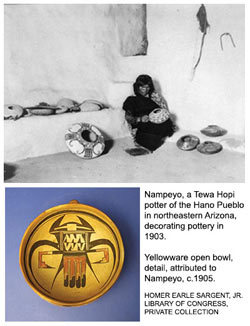 As Reviewed in High Country News

February 2015 Nampeyo was the one of the first Native American artists to be recognized and honored by Euro-Americans. The elegant abstractions of this traditional Hopi potter brought her fame and launched an art movement in the late 19th century. But she rarely signed her work, and much of it was later lost. In his book, In Search of Nampeyo, Steve Elmore, a New Mexico-based artist and gallery owner, tracks what he believes is her work through museum storage rooms, private collections and even old, mail-order catalogues, where her pieces may have sold for as little as 50 cents. What Elmore uncovers suggest an inventive potter, who may have created over 10,000 pieces and who patiently reworked intricate ideas until she was satisfied. Elmore reintroduces us to a distinctive artist whose work deserves rediscovery and celebration.