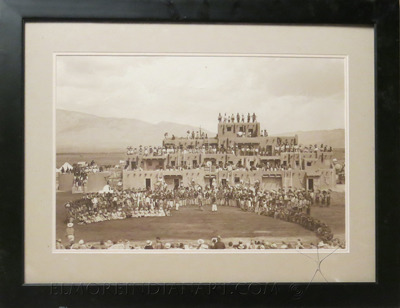 This is an original photograph of the "Painted Desert" exhibit, also known as the "Indian Village" at Balboa Park, part of the Panama-California Exposition in San Diego in 1915. The exposition celebrated the opening of the Panama Canal, and to promote travel to the Southwest, the Santa Fe Railway sponsored the “Painted Desert” exhibit (the fourth photo is a promotional Fred Harvey postcard). The exhibit spanned six acres, and sought to replicate Pueblo and Navajo life as closely as possible. As seen in the photograph, hides and chile ristras were hung from the adobe buildings, there was an horno for cooking, and of course, there were demonstrations of weaving and pottery-making. We do not know what is taking place in the photograph, but it appears to be some sort of ceremony. Jesse Nusbaum, along with 23 members of San Ildefonso Pueblo, supervised the construction of the “Painted Desert” (Nusbaum returned to Santa Fe upon its completion to supervise the construction of the Fine Arts Museum). Maria and Julian Martinez were part of this delegation, and demonstrated painting and pottery-making as part of the exhibit. Tonita Roybal also demonstrated pottery there. The delegates elected to reside at the “Painted Desert” rather than in the accommodations provided them. Pueblo pottery and jewelry from the Exposition are still part of the collections at the Museum of Us in Balboa Park. The photograph measures 13” height and 19” width, and 21” x 27” in its frame. A unique piece of the history of the Southwest and Pueblo pottery. Complimentary shipping included.

Email the Gallery about this item